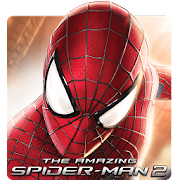 Feel like your favorite hero with the OFFICIAL The Amazing Spider-Man 2 Live Wallpaper. Marvel Comics and Spider-Man fans can recreate the excitement of the hit movie with this incredible Live Wallpaper app, exclusively for Android!

Get ready for high flying, web swinging action directly on your home screen!

Download the free version of the The Amazing Spider-Man 2 Live Wallpaper, based on the Marvel / Columbia Pictures sequel, featuring a close-up of Spidey’s chest logo on his costume!

You can unlock the premium version of the Live Wallpaper featuring a fully animated and interactive 3D model of the ol’ web-head, Spider-Man, wearing his costume based on the hit film The Amazing Spider-Man 2!

“You say you don't want the responsibility? Guess what? People like us... We don't get a choice.” – Spider-Man

Pay close attention to the spider logo on Spider-Man’s chest as his Spidey Sense “tingles”, which doubles as a battery gauge for your Android device!

Watch as it shoots and flickers with bright bolts of Spidey Sense when your device’s battery is full and then gradually dims as your power depletes.

When your device gets close to zero power your free battery gauge’s Spider-Man chest logo will flash red and the Spider-Man will provide audio assistance reminding you to plug in your device!

If that isn’t enough Spidey action for you, than an upgrade is in order via several unlockable premium options.

Once unlocked and onscreen, you can tap Spider-Man to invoke several awesome animations.

Also, to help you over-come any potential threats to NYC, the web-slinger will deliver you email, missed call and text alerts in the form of a web blast covering your entire screen!

If you’re feeling like a casualty of wasted time, unlock the premium Clock Widget, which features the day, time and local weather as well as the voice of the wise cracking web-head, Spider-Man.

Hear the hero in red and blue recite the time for you as well as little surprises here and there for you to discover while the Amazing Spider-Man 2 Clock Widget is set to your home screen.

Are you ready to protect New York City, the world and your Android device? Then unlock the Sticker Widget pack and place the ol’ web-slinger, Spider-Man, (3 different poses available), anywhere on your home screen!
Is your spidey sense still not tingling enough..?

There’s an unlockable premium custom keyboard skin featuring Spider-Man, the pride of NYC, who’s here to aid you in all your web-slinging texting missions!

Even the most deranged Oscorp villain isn’t going to be able to stand up to the super strength this app wields, making your Android phone or tablet the most heroic device around.

The whole world’s going to be watching, (and downloading), The Amazing Spider-Man 2… Don’t miss out on the web-slinging excitement; download today!

Fully optimized for devices and tablets.

The Amazing Spider-Man 2 Live Wallpaper uses READ_SMS and READ_CALL_LOGS to enable the ol’ webhead to help you stay up-to-date with all of your device’s incoming texts and missed calls. If you have unlocked the 3D version of Spider-Man, he will deliver animated alerts for both new texts and missed calls directly on your homescreen!

- New Utility Widgets including a Spidey Calculator and Flashlight