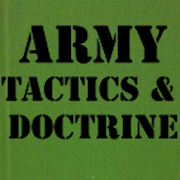 Army Tactics & Doctrine is for all Soldiers that want to understand how the Army works. Words mean stuff. The Air Force has jets, the Navy has ships, Marines have hard heads and the Army has Doctrine. Tactics are the specific ways in which we carry out operational tasks.

Comes with an optional Membership to the New School Army, an organization to help all Soldiers become the positive change they want to see in this Army.