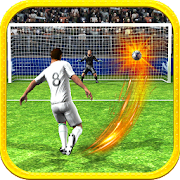 If you are a football (Soccer) fans from Asian ,you will love this Asian Cup Penalty Shootout football game,Help your favorite team to win the football asian cup! You can choose any team participating in The 2015 AFC Asian Cup tournament. Defeat selected opponent and move up in the rankings!
Asian Cup is an international association football tournament run by the Asian Football Confederation (AFC). It is the second oldest continental football championship in the world after Copa América. The winning team becomes the champion of Asia and automatically qualifies for the FIFA Confederations Cup.
The AFC Asian Cup trophy which is awarded to the winner of the tournament. Since the first tournament it has been awarded to the winning team for them to keep for four years, until the next tournament.,The final tournament is being played in two stages: the group stage and the knockout stage. In the group stage each team plays three games in a group of four, with the winners and runners-up from each group advancing to the knockout stage. In the knockout stage the eight teams advance to compete in a single-elimination tournament, beginning with the quarter-finals and ending with the final match of the tournament. A third-place match is also played between the two losing teams of the semi-finals.