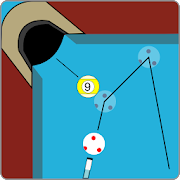 If so, this powerful App will be for you!

Position the cue- and objectball on the table and wipe your finger in horizontal and vertical directions to rotate the cuestick around the cueball. The track lines are computed immediately. Set the speed of your stroke and position the cuetip on the cueball to get more control for the cueball. Would you like to find a good strategy for a drill? Just open the option panel and add more balls! Move the balls to the right position for planning your drill. The simulation takes care on all balls! Have a look at the computed cutangle and try the shot on a real table.

1. Move finger up and down on screen to move the cue around the cue-ball "SLOWLY"
2. Move finger left and right on the screen to move the cue around the cue-ball "FAST"
3. Tap and hold cue ball, or object ball(s) to reposition the ball, and use red-crosshair for precision in positioning
4. Push the Aiming button and tap and hold the green cue tip. Move it up for a follow shot and move it down for a draw shot. Left or right for sidespin.
5. Change the stroke speed with the slider below
6. Push the Settings button and change the number of balls, or set the tangent line to show mode...