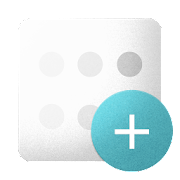 is a new Material Design icon pack inspired by the grain effects from Google illustration.

This icon pack is based on Nucleo UI but with three big difference : no long shadow, a grain effect and bright and shiny colors.

What will you find inside: Over 5K+ icons, complete support for all stock icons from the most important smartphone producer, one of the most complete games section, new and original cloud wallpapers, many alternative icons for the drawer and for the most important play apps and many others feature.
just have to try....

INFO
This is not a standard application. In order to function you need a Custom Launcher
If your launcher isn't in the list inside the app you can apply it manually.
Go in the launcher settings then apply the pack!

MISSING ICONS
You are getting lost icons? Send me a request by the tool inside the app and change the email object in "Activity Request". I will fix it!

Fix a lot of missing icons