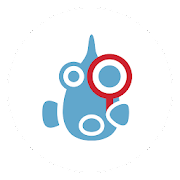 【Identify Every Fish by Photo】
Mikke is the fish identifier with image recognition.

"What kind of fish is this?" As soon as you wonder, take the picture of it, upload it, and this app will identify it right away as saying, "is this it?" It is useful not only when you go fishing or playing in and around the water but also for a school project of a summer vacation.

The identification is based on species and groups. If the specie can't be identified, try it again with groups. The app subjects to approximately 2000 kinds of fish in the sea around Japan excluding a squid group and an octopus group.


【The identification accuracy is more than 70%】

Identifying fish from photographs is quite difficult even for the experts. Given that, Fish Search has such a high accuracy of 70%(*1) out of 80 suggested species. Furthermore, its accuracy goes up to 90%(*2) when it comes to groups. Please note that the accuracy will change depending on the specie or your way of taking a photography.

Roughly, you would get three right answers out of four by the species identification.

*1, *2 The numbers are based on the data of an experiment subjecting to 200 kinds of fish that are popular in the sea around Japan.


【A tip to improve the identification accuracy】

A picture on the following conditions will improve the identification accuracy.

●Take a picture of only one fish
●Place the head left and take the picture from its side except for flat fish group.
●Take a picture of a whole fish, from the tail to the head.
●Chose a simple background
●Take a clear picture

A picture on the following conditions is not good.

●There are more than 2 fish.
●There are other things than fish such as a hand of a person.
●A long fish such as eel.
●Only head or only tail is taken.
●There is only back side of fish since it is taken from the above of it.
●It is difficult to distinguish the background and the fish.


【For all who love fish】

This app has been developed based on the "WEB Fish Encyclopedia", which has data of
about 50,000+ kinds of fish. In order to improve accuracy of the app, we made the best use of inventiveness in the back end system.

We flatter ourselves that we have created the best fish identifier so far, yet it doesn't have 100% accuracy because of the characteristic of its system. We hope you will understand that and enjoy this app as a simple and easy tool to identify fish.

- To make it easier to use, the image cropping step has been removed.