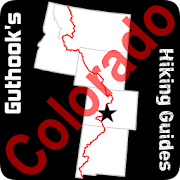 **NOTE: THIS APP WILL BE PHASED OUT IN 2018; PLEASE DOWNLOAD THE IDENTICAL APP INFORMATION IN THE ALL-IN-ONE 'CONTINENTAL DIVIDE TRAIL' APP BUILT IN PARTNERSHIP WITH THE CONTINENTAL DIVIDE TRAIL COALITION**
CDT Hiker: Guthook's Guide is a 5-part smartphone guide for your hike on the Continental Divide Trail. The CDT Colorado app covers the 739.0-mile official CDT route in Colorado from the New Mexico/Colorado border to the Colorado/Wyoming border. It also includes these alternate routes: (1) Creede Cutoff, (2) Silverthorne, (3) Argentine Spine, and (4) Rocky Mountain National Park shortcut.

The app has been built in partnership with Jerry Brown of Bear Creek Survey Service. Each waypoint in the Bear Creek map books is plotted and described in the CDT Hiker: Guthook's Guide apps.

Guthook's Guide use a combination of your phone's GPS, downloaded topo maps, and the Google Maps interface to accurately locate your position on the trail. No phone service? Not a problem -- your phone's GPS pinpoints your location on top of topo maps downloaded as part of the app.

A bright red line indicates the location of the official CDT on the map. Alternate routes are indicated in blue and accompanied by a separate list of waypoints and elevation profile. Waypoints of interest to the hiker are plotted on the map. There are also markers on the map every mile or kilometer of the trail track.

The elevation profile shows trail distance vs elevation and plots your current location on the trail. Each waypoint is plotted on the profile. Each waypoints is clickable, opening to the waypoint's detail page.

The guidebook lists every waypoint in order by distance along the trail.

Each waypoint includes a detail page, providing further details about that particular waypoint. Details include the waypoint's mileage point and elevation, photographs of many of the waypoints, distance northbound and southbound to the next water source, a Trail Register where you may post comments and read other users' comments, and other details that will help you during your hike, and help you plan your hike.

The types of waypoints include: