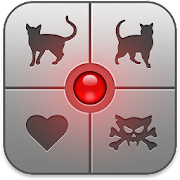 Please note: Cats (and other pets) will often respond to the sounds produced by this app. If your pet displays signs of distress or aggression, discontinue use immediately. No animals were harmed in the making of this app.

Minor updates to make it purrfect!

Human-to-Cat - Play with your cat!