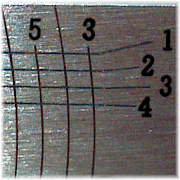 This application allows the locksmith to quickly determine which Original Lishi 2 in 1 Pick and Decoder to use on vehicles in the USA market. A secondary benefit of this application is the ability to determine if a tool will actually work on a vehicle. For example, the TOY43AT tool will enter the keyway on a 2001 Toyota Corolla but it will not work because the 2001 Corolla is on the older eight wafer system instead of the ten wafer system the TOY43AT is designed to work on. This information will save the locksmith time and possible damage to his tool.

The locksmith can also create a personal inventory of the tools he owns with this application. This list allows the locksmith to quickly determine if he has a specific tool or if he needs to place an order for a tool he does not own. While viewing the customized list, the locksmith can select a tool and view all vehicle models that the tool is designed for. For example, when you click on the NSN14 tool, it will display the Infiniti, Nissan, Subaru and Suzuki models it will pick and decode.

Other benefits include links that will take you an authorized Original Lishi Tools distributor website.

Version 9.0 updates the app to 2014 which includes twelve new tools and one hundred nine (109) new models.

Version 12 adds the 2015 models. Also, it has been optimized to load screens faster.