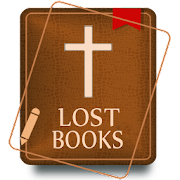 The Lost Books of the Bible by Rutherford H. Platt, Jr., 1926
with King James Bible

Lost Books of the Bible is a collection of New Testament Apocrypha, including many works which were admired and read by the early Christians, but which were later excluded from the canonical Bible. It includes accounts of the young Jesus, particularly the Gospel of Mary and the Protevangelion, which provides additional folklore about the birth and youthful adventures of Jesus and which are missing now. Of note are the letters of Paul and Seneca, and the letters of Herod and Pilate, which are most likely a forgery, but add more depth to the question of the historicity of Jesus. There are also a number of non-canonical epistles, such as Laodiceans. Also worth a close read are the three books of the Shepherd of Hermas, which uses apocalyptic and symbolic imagery. This collection is an invaluable selection of portions of the New Testament which illustrates the fluid nature of the early Biblical canon, and provides access to all of the 'spare parts.'

The Forgotten Books of Eden by Rutherford H. Platt, Jr., 1926
This is a popularized translation of the OT pseudepigrapha, quasi-Biblical writings which never achieved canonical status (or inclusion in any of the official Apocrypha). This isn't to say that these documents are forgeries, just that for one reason or another they were not considered part of the Biblical text by the first millenium (C.E.) compilers. This book contains translations of all of the texts found in volume I of the weighty Oxford University Press Apocrypha and Pseudepigrapha, without any of the apparatus.

In The Lost Books of the Bible you can find such popular free books as: The Apostles' Creed, The Shepherd of Hermas, The First Book of Adam and Eve, The Gospel of Nicodemus and many others books which are missing of the Bible!