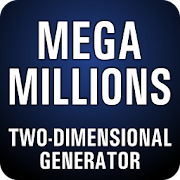 This two-dimensional app generating numbers contains an algorithm, UNIQUE IN THE WORLD that acts like real lottery draws. As in reality, every number is chosen in a certain time. This is how it happens with the app and it generates the time as well as the numbers, being the closest simulation to the real lottery draw.
You can choose how many even and odd numbers the app to generate and play.
There is also a random option for Lucky Numbers and Additional Number that generates numbers randomly but in a certain time.

Players may pick six numbers from two separate pools of numbers - five different numbers from 1 to 70 and one additional number from 1 to 25. You win the jackpot by matching all six winning numbers in a drawing.

Every week millions of people all over the world play the lottery games available in their areas. Many will play but only a few will actually win a big prize. Have you ever taken the time to think about what the winning players have done differently than all of the other people who did not get a prize? Perhaps what you need I a strategy and the right kind of app on your phone or Tablet to help you select the numbers you will play.

Too many people have not established any sort of effective strategy when playing the Mega Millions lottery. They play numbers they are familiar with such as their wedding anniversary date or their work identification number. This tactic has not been proven to be effective and most people who play this way will only end up losing their money.

Our Mega Millions app is a true random number generator. There are many apps and web pages out there that claim to be random number generators but they really are not random because of the programming strings used by the developers. These apps are too limited to be truly random so they are not able to accurately duplicate the environment in which Mega Millions numbers are drawn so there is no reason to expect these apps to generate numbers that will win.

Only our line of number generator apps use our exclusive two-dimensional algorithm to guarantee truly random number picks. Our lottery number apps also generate the time as well as draw the numbers. This combination offers a very close simulation of the environment in which actual lottery numbers are drawn (including Mega Millions!)

If you decide that you do not want truly random numbers to be generated our Mega Millions app still has features that will be useful to you. You can choose to generate all random numbers, only one random number or any amount of random numbers for a single play. You can also choose whether or not you want the special number to be random or if you would rather pick it yourself. Our app gives you the freedom to play the Mega Millions lottery however you wish to play it! No other lottery number generator app gives you all of these features and our exclusive two-dimensional algorithm.

----------
TIPS: Generate almost equal numbers odd/even, until you see your favorite number. Mathematically, these numbers you have to play about 40 times. It is not easy but it is the best way to win!
www.mylotto-app.com
---------

For further details or any questions please send me an email at: office@mylotto-app.com

Disclaimer:
This application has no link in no way with an Mega Millions organism and it does not allow to participate in the official game of the Mega Millions.