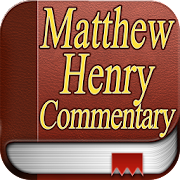 Originally written in 1706, Matthew Henry's six volume Complete Commentary provides an exhaustive look at every verse in the Bible.

Matthew Henry's well-known six-volume Exposition of the Old and New Testaments (1708–1710) or Complete Commentary, provides an exhaustive verse by verse study of the Bible. covering the whole of the Old Testament, and the Gospels and Acts in the New Testament. After the author's death, the work was finished (Romans through Revelation) by thirteen other nonconformist ministers, partly based upon notes taken by Henry's hearers, and edited by George Burder and John Hughes in 1811.