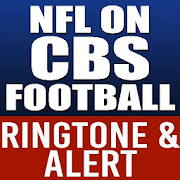 The NFL on CBS is the branding used for broadcasts of National Football League (NFL) games that are produced by CBS Sports, the sports division of the CBS television network in the United States. CBS has also broadcast Thursday Night Football games

This is the Theme music of NFL on CBS.

- Set a short NFL on CBS as a TEXT/Notification Alert.

This is the highest quality digitally rerecorded version of the Original theme.

- Just download and open your NFL on CBS Ringtone app