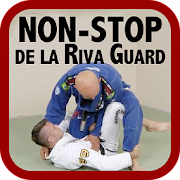 This is a step-by-step system for the de la Riva Guard. You’ll get a blueprint for adding this super-effective and competition-proven guard to your game, so that at every stage of your attack you’ll know what to do next.

Your instructor for this app will be Brandon ‘Wolverine’ Mullins. Brandon is a BJJ black belt, a world champion, and a gifted instructor.

First Brandon will teach you the exact grips, hooks and body position you need to effectively control your opponent and prevent him from passing your de la Riva Guard…

Then you'll learn the most effective de la Riva Guard techniques to sweep and submit your opponent, broken down into easy-to-follow steps by Brandon and his friendly teaching style….

But in every guard position it is unlikely that your opponent will just stand there and let you sweep him. He’ll resist, fight back, and try to pass your guard…

That’s why for every technique in the Non-Stop de la Riva Guard app you’ll learn exactly what to do if your opponent tries to resist. By knowing what to do you’ll be able to use his resistance against him and simply sweep him in a different direction, or submit him a different way.

Now after you sweep your opponent you don’t want to end up stuck in his guard and put yourself in danger. You want to pass his guard! This is why the de la Riva system you’re about to go directly from your guard sweeps into your guard passes, just the same way that the top competitors do.

All the techniques tie together, which makes it a gameplan.

If you’re not using gameplans in your jiu-jitsu then you’re giving your opponent an opportunity to turn the table on you after every technique you try.  Single moves are great, but they’re not what high-level jiu-jitsu is all about.

Non-stop de la Riva is a system where each move works together with the others; the techniques set each other up, and provide you with options if you run into problems. That’s why this super-powerful guard system is easy to learn and implement on the mats.

Brandon is able to take the highest level of jiu-jitsu and boil it down into its simplest steps. That’s why in this instructional you’ll get complete, beginning-to-end, cradle-to-grave strategies.

This instructional gives you the formula that you can use to frustrate your training partners on the mats and defeat your opponents in competition.  Boiling down all that complexity into a step-by-step process so that you can use the same techniques, combinations and strategies that elite-level professional competitors are using.

Adding the de la Riva Guard to your game has never been so easy!

Bug fixes and updates for linking