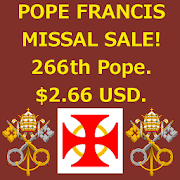 The world's most complete Roman Missal serving as a Catholic Mass Guide with Prayers Readings in English. This app now contains a few prayers before and after Mass in English and Latin. We are working to add more prayers.

From the very start, this app already contained the texts for:
a) Mass for the Pope
b) Mass during a Conclave (i.e. "Sede Vacante")

Created in collaboration with publishers of the Roman Missal since 1989 in English Speaking countries.

This app will initiate online license verification at the first run.

The app can be used offline, unlike the other Missal apps that require an online connection to download the prayers or readings for the day. Additionally, it contains the complete supplement of the Roman Missal for use in the Philippines (i.e. Simbang Gabi masses, Feast of the Sto. Nino, etc.). We are working to add more supplements for the English speaking dioceses and territories all over the world.

The app has an implementation of the General Roman Calendar that automatically displays the celebration for the day for any day of any year, forever. The app then loads the proper index pages for the respective season. The app has handy buttons that correspond to the ribbon markers in the printed missal.

The features of the system had been suggested by Priests and faithful who have used Missals for the last 30 years or more.

This app can take the place of the Missalette. It's complete. It's everything you need for following Mass. (keywords: Roman Missal, Catholic, Missalette, Misallette, Missallette, Mass Readings)

- Fixed broken links on the Easter Masses and Readings

- Fixed unclickable links for Prefaces, if in stock Latin or stock English languages. - (Thanks to April Agregado for reporting the bug.)