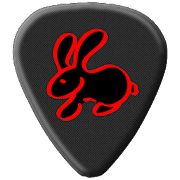 Learn the guitar scales! On my phone you say? Yep. Brought to you by the makers of RR Guitar Fretboard Trainer, is this new app designed to take your mastery of guitar scales to the next level.

Want to memorize the CAGED scale patterns? Develop your ability to quickly identify a scale box at a specific position on the fretboard? Memorize what the scale degrees are on the various scale boxes? This is the app for you. RR GUitar Scale Trainer allows you to practice any scales you want. What's that you say? You play the Bass or the 10 String lap steel? No problem, you can configure the number of strings and open string tunings. You want to work on the awesome new semi-chromatic non-western scale you came up with and are going to use to revolutionize music? That's fine too; you can set up new scales and practice those as well.

Want to try before you buy? That's cool, look for RR Guitar Scale Trainer Lite. Same thing, but you're limited to one scale (just enough to get you hooked).

- [bugfix] (1.07) Fix crash when some accidental notes selected for tuning.