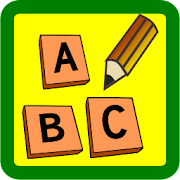 
Our educational game shows the alphabet letters and teach them to recognize letters as they appear.

An alphabet is a standard set of letters which is used to write one or more languages based on the general principle that the letters represent phonemes of the spoken language. This is in contrast to other types of writing systems, such as logographies, in which each character represents a word, morpheme or semantic unit, and syllabaries, in which each character represents a syllable.

A true alphabet has letters for the vowels of a language as well as the consonants. The first "true alphabet" in this sense is believed to be the Greek alphabet, which is a modified form of the Phoenician alphabet. In other types of alphabet either the vowels are not indicated at all, as was the case in the Phoenician alphabet, or else the vowels are shown by diacritics or modification of consonants, as in the devanagari used in India and Nepal.

The modern English alphabet is a Latin alphabet consisting of 26 letters – the same letters that are found in the basic Latin alphabet:
Majuscule forms (also called uppercase or capital letters)

The exact shape of printed letters varies depending on the typeface. The shape of handwritten letters can differ significantly from the standard printed form (and between individuals), especially when written in cursive style.

Written English uses a number of digraphs, such as ch, sh, th, wh, qu, etc., but they are not considered separate letters of the alphabet. Some traditions also use two ligatures, æ and œ, or consider the ampersand (&) part of the alphabet.

The names of the letters are rarely spelled out, except when used in derivations or compound words, derived forms , pronunciation of certain acronyms , and in the names of objects named after letters .

Sounds of Ocean Rest and Relax

Sounds Of Rain Relax your Mind