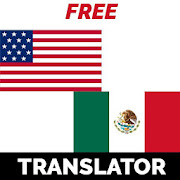 Helps you translate text, words and sentences from Spanish to English and from English to Spanish language. This app could be used for word meanings and as a dictionary too.

Spanish English Translator has these benefits for you:

- Spanish English Translator (Traductor español ingles)
- Hear translated text in English or Spanish
- Can be used as a Dictionary.

- Easy to use Translator.

Bonus Feature – Learn and Master the pronunciation as it has in built audio feature. Hear the translated text and conveniently communicate with your friends, girlfriends, boyfriends, family members or tourists.

If you are a Traveler or Student or language enthusiast then this app is a must have for you.

Now you can learn Spanish or English language at your convenience, while driving, playing games, in class, while on travel, while commuting to work, with friends, etc.

We have Spanish translator for other languages too, for e.g. German, Russian, Arabic, Korean, and many more. Drop us an email if you are interested.