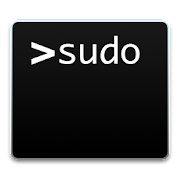 This is the old version (version 2.2.2) of this app. Please download the new 3.x version from https://drg.li/asinew

This app WILL NOT give you root! It installs a sudo script to your system so you can have a more desktop style approach at using root in adb shell and Terminal Emulator.

This will install a sudo script to your /system/

We're open source! Check it out on GitHub: https://github.com/ColtonDRG/AndroidSudo/

Not a Google Play user? Download the APK directly from DRGdl: https://static.coltondrg.com/android/sudoinstaller/sudoinstaller-222.apk

Why would you want this? For any power user who uses Linux or Mac OS X on their computer, you will know the sudo command and you may often type sudo instead of su -c, out of habit, in adb shell or Terminal Emulator. This will let you use sudo like you would on your PC.

This app makes modifications to your system ROM. We take no responsibility if you brick your device or mess up your system!

If you decide you want to undo this, or you need to remove it for any other reason, you can do so at any time by opening the app and clicking remove!

After installing, you can remove the app and keep sudo, but you will need to reinstall the app to remove sudo.


No data is collected directly from the app, however, some data may be gathered and shared with us for crash and bug reports by Google Play according to Google's privacy policy.