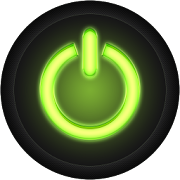 *Compatibility*
This remote control will work on any Android phone that has an IR blaster to control TVs. The only exlcusion is LG G2 before Android KitKat

*How does it work?*
The Off Button has a database of 367 universal IR codes that will power off any TV in seconds. This functions like a TV-B-Gone for your phone!

*Saved Codes*
Does cycling through all codes take too long? Now you can save a specific code that turns off a specific brand or model of TVs. Saved codes come directly from the 367 code database, all you need to do is directly specify the name and number of the signal.

*Send Continuously*
Utilize the send continuously check box to control a whole wall of TV's remotely. You can also continuously cycle a single TV just by aiming the remote control blaster at the TV.

*The On Button?*
Want to turn the TV back on again? Remote control signals which turn TV's off also will turn TV's back on. Similar to your remote control, the IR code is merely a universal power toggle. It will directly turn the TV off or on depending on the current state of the TV.

The Off Button will not universally work on any phone. Only phones with IR Blasters to direct the TV signals are compatible. If your device is able to direct TV's like a remote control and this app says it is not compatible, please contact me so I can turn off the incompatibility warning for your device.

*Tips*
-Make sure you are pointing the unlock button (IR Blaster) of the phone directly at the TV as you would a remote. The distance needs to be similar as well
-It does take several minutes to go through all 360+ codes, but the most common codes will be in the first 50 - 100. I can't speed this up any, as transmitting an IR code takes a finite amount of time. Even a universal remote control would take several minutes to cycle through all codes. Try saving a code for quick access!

*Feature requests*
I am actively working on new features to change the way you turn off TV's! Have an interesting idea to incorporate to the universal TV Off app? Send me an email and I'd love to consider it in an upcoming version!