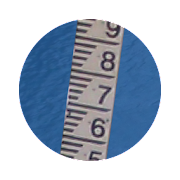 
Tide 7 downloads tide predictions to your Android device; storing them for quick, easy access when you need it - no need to go back online.

Tide 7 is designed to minimise network data traffic, while maximising data availability. Network connection is only required to download the predictions - which can then be viewed anywhere, anytime. No ads using up your bandwidth and battery!

7-day tide predictions are downloaded from the UK Admiralty EasyTide service and stored on your device, making them available to you instantly - whenever and wherever you want, without network access.

Full tide predictions include times and heights of High Water and Low Water together with a graph (height vs time) representing the prediction.

Note for users of Honeycomb (Android 3) and later devices without a menu button:

The on-screen 'action overflow' button performs the same function as a menu button. This appears by the navigation buttons as a vertical line of three square dots.

On some devices - including HTC One V and HTC Desire C - the on-screen button does not appear, in this case, press and hold the recent apps button to open the menu.

Added selected locations in France and Spain; added new locations and fixed broken ones in Netherlands and Belgium.