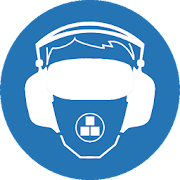 ViewR is a voice controlled demo application that basically mixes a side by side view
for head mounted display solutions like Dive or others with Qualcomm's Augmented Reality SDK Vuforia.
Despite it's limited functionality, ViewR gives a slight impression of how it could feel to be robo cop :)

Targets
- "smart watch" target will show an augmented and interactive menu
- "ARena" target will expose a controllable robot (only tested with PS3 Controller)
- MTG trading card target will show a 3D bird (http://magiccards.info/scans/en/m12/165.jpg)
- (photographed) poster targets will play movie trailers and an interview (http://www.buelter.biz/viewr/targets)
- other poster targets will show a sword, a shield and a not yet animated zombie
- background of my not yet ready website will play a short ad (http://bit.ly/1aefcA0)


Instructions
- Make targets available (either on screen or printed)
- Press ok and put on your HMD
- Look at target to execute an action
- Tap screen to apply another shader to the video background
- Double tap to access options menu
- Press back button to view about screen (twice to quit)
- Whistle/snap/clap to activate voice commands (if it works, you will hear a sound)
- Use "next" and "back" to switch between shaders
- "flash on" and "flash off" to toggle camera flash
- "autofocus on" and "autofocus off" to toggle continuous autofocus
- "focus" to immediately autofocus
- "screenshot", to save a screenshot to /sdcard/Android/data/biz.buelter.viewr/files
- "menu" to access options menu and "close" to close it again
- "launcher", starts the divegames launcher, if you have installed it
- "drone" and "camera" to switch between camera and Walkera QR W100S FPV (make sure you're connected to it)
- "compass on" and "compass off" to toggle compass,
- "exit" to terminate

Known issues
- Seems not to work on GT-S5301L (got a crash report)
- FPV for Walkera QR W100s works slow
- Speech recognition will only work with Android >= 4.03
- Runs slow on old devices
- Positioning of targets in the scene does not work as well as in other vuforia apps
- Some shaders are far from perfect as I didn't want to go to deep into shader programming

Version 1.11 was tested on S4 with KitKat (works) and on S1 with ICS (very slow, voice control doesn't work) but technically voice recognition should work on all devices with Android >= 4.03

ViewR will not make use or even send any of your data anywhere (just in case you thought of it:))

Please keep in mind that this is experimental software which is published as a demo and feel free to contact me anytime for whatever reason:)

- improved positioning of many targets (still not perfect)