Voice of the Woman Translator APK 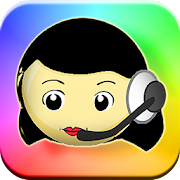 The Best Android Application, the voice of translator woman with translator, write or speak the text, very practical, the app was missing to your happiness, translate sentences transform into audio and send it to your friends from social networks, send it to WhatsApp, Facebook Messenger, Telegram, ICQ and many more, it is a free app supports multiple languages, an app like you've never seen the same, the translation is just to try and if you like to buy the paid version with unlimited translations,
- Easy to use,
- Voice command,
- Speed and Tone Control (bass, treble and speed)
- Demonstration Version translation, but Unlimited conversion,
- Multiple languages supported,
- App Great fun for u rejoice and send funny audios in their groups and social networks
- Send unlimited audio files to your friends, but translations which has a limit of 10 translations.