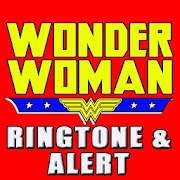 Wonder Woman is a fictional superhero, created by William Moulton Marston. Wonder Woman appears in comics published by DC Comics. She is also one of the founding members of Justice League.

This ringtone is the instrumental version of the Wonder Woman Intro Theme Music from the Warner Bros movie Batman v Superman: Dawn of Justice OST - Is She With You? - original music by Hans Zimmer & Junkie XL

- Set a short Wonder Woman tone as a TEXT/Notification Alert.

This is the highest quality digitally rerecorded version of the Original Music.

It is very simple to maximize your use of this ringtone -