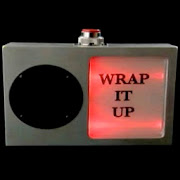 
The concept of the app is taken from the Dave Chapelle episode with the Wrap it Up Box. Wrap it Up Box: In this hilarious sketch people who get tired of another person pull out a box that says Wrap it Up. It plays music just like awards shows when celebrity's speeches are going too long.