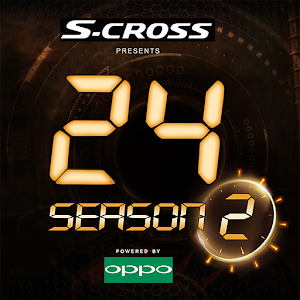 THANKS FOR THE OVERWHELMING RESPONSE. BASED ON YOUR FEEDBACK, WE HAVE INTRODUCED NEW LEVEL OF MISSIONS AND ENVIRONMENT. PLEASE UPGRADE TO VERSION 2.0 AND RELIVE THE ANIL KAPOOR EXPERIENCE in 24 Season2 GAME PLAY

ONE MAN. ONE DAY.
24 THE GAME allows you to live the life of Jai Singh Rathore, chief of the Anti-Terrorist Unit of India, while he thwarts an attack by the terrorists and provides an opportunity to take the terrorists head on in a battle of epic proportions. The missions take place on the rooftops of Mumbai with the iconic Bandra-Worli sea link in the background.

LIVE THE ACTION
The ultimate third person shooter with stunning visuals, precise controls and advanced physics. Jump in the heat of battle and push your device to the limit!

COMPLETE FIERCE MISSIONS
Emerge from cover points to take down thugs who are armed with pistols, sub-machine guns, rifles and grenades. Fight off increasingly difficult waves of enemies over survival based and kill based mission types.

COMMAND DEADLY WEAPONS
Take the fight to the terrorists with artillery of Pistol and Sub-machine gun. What more, you can also call for an air-strike when required. Armor packs and health packs can be purchased from the store to provide you with an edge over the terrorists.

24 THE GAME is free to play game, which gives the players with an opportunity to re-live the action packed life of an Anti Terrorist Unit officer while he fights it out to protect the country.