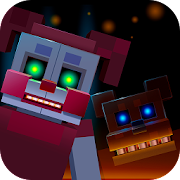 Crazy animal robots escaped from the Cube Pizzeria – now they’re everywhere at the Cube City! Moreover, all dead bodies left their graves and roaming free on city streets! You’re just an ordinary cemetery guard, and you should do all that you can to save your life! Turn on/off the lamps to stop cube robot bears, foxes, tigers, chicks and bunnies or hungry walking dead and not to let them attack you! Enjoy the atmosphere of pixel horror with 5 Nights at Cube Pizzeria City in 3D!

Be ready for overcoming enemies! Spend five nights at Cube City hiding from angry cube bears, tigers, chickens, bunnies, and foxes! These robots were made to help in Cube Pizzeria but during the night ancient evil awakening inside their bodies, and one day they break free from Pizza House and starts chasing you! And it’s not the only menace – hungry cubical zombies and even cube ghosts roam free at these streets. Unfortunately, you don’t have a gun – only a flashlight can help you to protect yourself from the attacks!

Are you afraid of cube robot bears or other monsters, like zombies? Turn on your flashlight - it will scare away angry cube creatures that may be creeping at the far end of the hallways or at the city streets! But beware - if any cube monster has crept too close, it will be the end of your cemetery guard career… And your life too!
Mind your energy bar – if it ends, your life would end too. Use the radio set to restore energy and continue your activities as a cemetery guard!

Spend five nights at Cube City full of scary cube monsters - chicken, fox, bunny, bear robots and ever more! Use a very limited amount of electricity per night to protect yourself from robots’ attack! Stay in your security office, watch cube creatures with cameras and try to survive! When you run out of power for the night - all cameras and light are off and cube robots are able to move! Beware of cube bear robots walking in the city streets from abandoned pizzeria!

Survive being a cemetery night security guard and escape from your nightmare! Don’t let these nightmarish cube monsters get close to your security office! Spend five nights at Cube City and stay alive! Finish your work safe after five scary and horrible nights with 5 Nights at Cube Pizzeria City in 3D!