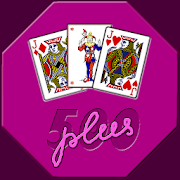 Card game Five Hundred was invented in US in the early 1900s. As its predecessor Euchre, it modifies trump suit by using special cards (Joker, Right and Left Bowers), while at the same time involves a bidding system similar to the one used in Bridge and provides a kitty for the contractor to exchange unwanted cards. The game is especially popular in Australia, where it is has become the national card game.

Though 500 is often viewed as a partnership game for 4 or 6 players, it was originally designed as an individual 3-player game, and, according to card game experts, the game is most exciting in this form, where each player can demonstrate their analytical skills to the full.

This application implements a three-player version of game 500 with one human and two computer players. Since, to our best knowledge, the game has no official rules, while various sources provide different, often controversial descriptions of the game, the application allows to modify game rules to suit your expectations. These modifications affect scoring system, presence of Joker, conditions of own overbid, limitations on bidding Misère (Nullo) and leading with Joker in a non-trump game, style (or absence) of All-Pass games etc.

In addition to rule modifications 500+ allows to set up appearance of the game (e.g. background image, style of face cards, picture of card back), customize sound effects, and specify play list for custom background music.

Three skills of computer players are provided. The development is strictly based on the principle of computer honesty: a computer player never has access to disallowed information, like seeing other players' cards (apart from contractor's cards in Open Misère), content of the kitty or discarded cards. At the same time the application provides some "cheat" options, making it unnecessary for the human player to memorize cards that went out of play, or remember which suit a particular player failed to follow.

For those who are new to the game, the application offers a detailed description of game rules. Other information pages are included, like rule modifications (tweaks) and settings, control, logic of computer players, etc

The application is designed to adapt to any version of Android. 'Vintage' release, available for Android pre 4.0, is free of advertising, but also does not support global tables.