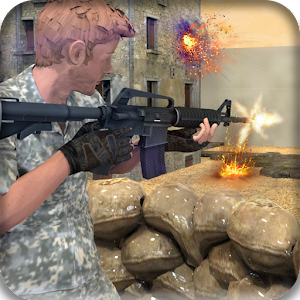 Terrorists are training their terrorist soldier for battle against your home land. They have established their army camps in forest. This is a serious security issue. Army commandos are gathering their power on the front-line of border. Front-line commandos should be ready to counter enemy attack at any time. Enemy army invasion can happen at any time. As best army commando you are given task to break army soldiers power. Don’t let the enemy make strong hold near your power as many armed forces did in world war II (second world war). They gathered army soldiers along with tanks and ammunition and suddenly attacked on enemy. They started an endless war with aircraft fighter jet bombing on cities and destroyed countries over countries. Your enemy also have Apache gunship helicopter. Armor vehicles and tank can also reach in camp when needed.
Take timely decision and immediate penetrate in enemy camps and kill every single soldier of your enemy before they play game of blood and fire in your county. You have to fight the battle for the sovereignty and dignity of your country. It’s time to start the war with enemy and make the land of enemy a great battlefield.
Enemy soldiers are very clever in gorilla war. They are equipped with AK 47 rifles. AK 47 is semi and fully automatic brushed assault rifle/gun. Many soldiers are equipped with sniper gun. Sniper shooter can kill you as you caught in sight. Destroy all vehicles of enemy army and shoot every single enemy army commando adventures. Guards on army post are very dangerous marksman. Their guns are equipped with night vision telescope. So first try to shoot dead those marksman and snipers.
This is not only a sniper shooting game but this is a complete series of commando missions games. You have to fight a long battle. This is a war of courage and glory. Use your ammunition wisely to fight long battle. Don’t waste bullets and hand generates. One shoot one kill rule must apply to save your ammo. You are very away from your base camp behind the enemy border line. There is no supply line to provide you’re your requirements. So you alone have fight and win the battle. These terrorist are very aggressive and savage. Thy have occupied large area of your country and ruling on many clans.
It’s time to get rid of those robbers and legendary assassins who can assassinate anyone in your country. They have made the public slaves. Destroy their huts and army camps with ballistic missiles. You can also use RPG 7 (rocket propelled grenade) bazooka to destroy tanks. Rockets launcher have many kinds they are use as anti-aircraft and anti-tank. Once you exit the enemy camp artillery unity of your brave army soldiers will start heavy fire with cannons and ballistic missiles. Bombardment and shelling is necessary to completely destroy enemy camp.
Keep yourself secure to during cross fire with light machine guns and heavy machine guns opens fire. Never lose your courage during gunfire and heavy bombing. Accept any challenge in war zone happily and keep calm. You are 1 man army because you alone have to enter into camp without cover fire. Load ammunition in your gun check your belongings like pistol grenade and rifle gun and get embark to your mission. Police helicopter will drop in criminal’s camp. Best of luck.