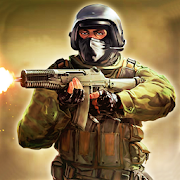 The addictive game play and modern weapons of this shooting game combat will make thrilling your free time. You are a commando soldier in this action battleground and it is your duty to shoot enemy soldiers. Unlike other boring shooting games 2020, This is an FPS Shooting game including range of deadly weapons, modern guns, combat arsenal and much more. You are an expert soldier with commando training from an elite army, so come at frontline and lead the action combat. You have many modern metal & modern shooting skills equipped in this new game and you should show yourself that you are a modern trained commando in the world. In the history of free games 2020 this shooting game is the best fps game for you.
The intense graphics and catchy story line are going to make your free time more thrilling in this free shooting games. The gaming experience will take you to a whole new shooting level of fun in this offline fps shooting game 2020. You have to play the role of a secret commando in this offline game 2020. Your duty is to serve your country and kill the enemy in this army war game among one of the best online shooting games. You need to be very brave and skillful soldier in this offline sniper game. There are dozens of strategic missions in this world best shooting offline game for free.

The gameplay of this commando game is very action packed & very thrilling. Do you wish for most popular games let’s enjoy this adventurous shooter game? Start your daily mission on enemies’ ground in this best offline or online shooting game to increase your player level. You have variety of modern weapons in this battle shooting games, just start your battle for free. All you have to do is to fight with the terrorist in new games.
You can kill your enemy in this one-man commando shooting games. However, it is recommended for you to use all guns in all missions of this shooting game. You have a pistol as side arm in every task of this sniper shooting game. You will earn money after completing each operation in this crossfire offline commando games. You can buy new weapons including sniper & assault guns in this sniper offline game and also can play as sniper online games. Moreover, you have a sniper rifle for free in this commando shooter games. All operations are very thrilling, you need to make a strategy to play this fps one man action games, play offline games now. Enemy force you are going to deal with is highly trained and professional in this shooting game.

Try handy controls of this fps army game. Control movement of the player in this best shooting game with joystick. Use crouch & stance buttons in this world war games to play & enjoy. Furthermore, your health bar and remaining bullets are also highlighted like in new games. Play non-stop action shooter with auto shoot guns in this shooting games online. If you like being a best shooter earn your fame in recommended for you commando game. Download free and enjoy this Action-adventure games and sniper shooting game 2020. In addition, you can also change the gun by tapping the gun icon. All of it makes this new shooting game very entertaining among the players of every age.

If you have no wifi, you can also play this offline game, absolutely free. So quickly download this interesting game available on Google Play Store for your android smart phones & tablets.

Made Compatible to 64-bit platform.