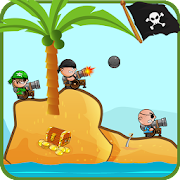 Conquering the Pirate Island is a strategy game of soldiers against pirates.

In this game, the player controls the two soldiers who have to kill all pirates living in each Pirate Island.

To do this, the player chooses the angle and the power of the shot of the cannon soldiers and then you should press the fire button . Remember that there is a time and if it runs out, you lose your turn.

✚ Objective of the game: To win the game you have to eliminate all the pirates of all the islands of the map.

The game Conquering the Pirate Island has been designed for children and for adults, offering high playability with touches of strategy.

If you have liked this game, remember to give us a +1 , and 5 stars, and if you can also give us a review on Google Play. It would be great. You can also help us by telling to your friends about the game, and putting a link to the game on your social networks. Thank You.

We have deleted ads of many screens.