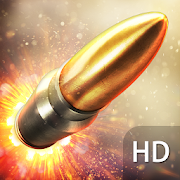 The new "Defence Effect" is a hurricane mix of a fascinating gameplay, super vivid graphics and realistic sound effects.
... For two thousand years goes this war. As usually – without any particular reason ... You are a soldier of the free Republic. So far the free. Your task - to stop invasion of the army of General Kuhn and inch by inch to clear the land of the enemy.
The enemy is on the watch. It has planes, tanks – from classics to the newest superweapon. But you also have not a slingshot: at your disposal are the bunker equipped with a turret and the most powerful arsenal. For protection of borders you have machine guns and cannons, rocket launchers and laser systems. Are you ready to start the battle to the last drop of your blood? Clear for action!
Key game features:
- Game modes: Campaign and Survival
- 3 difficulty levels
- 28 stages in Survival mode
- 10 types of weapons
- 6 types of fire support
- 12 kinds of ammo modifiers
- elaborate system of purchases and improvements for weapons
- settings of image quality
Follow the news: https://www.facebook.com/DefenceEffectSkyJet