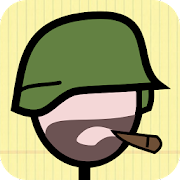 The Doodle Army™ wants you!
Enlist today and cut down wave after wave of enemies in this endless shooting adventure! Hear the sweet screams of your victims as you strafe them with submachine gun fire or explode them with grenades and roast their remains with the flamethrower.

The in game tutorial "Drill Sergeant" will guide you through the basics in Boot Camp. Soon you will be on your way to creating your very own heaping piles of bloody bad guy parts. See how far you can go before the enemy overwhelms you.

-Unlock and play various Boss Battles and Mini Games on your way to victory!

-Play as one of over 40 unlock-able characters in one of six battle zones.

THANK YOU:
Thank you to the users for your support and feedback. We read and respond to all legitimate suggestions and issues.

Email us directly from the Google Play Store page so we can better assist you with your feedback or issues. Thank You!

-Added support for back button.