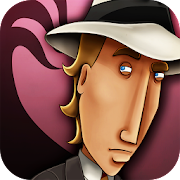 Step into the shoes of Charlie, a private detective and rich heir, for whom humor is the best weapon!
In Dream Chamber, uncover the culprit in this simultaneously breathtaking and dreamlike quest.

A humorous adventure with a quirky cartoon graphic style
Immerse yourself in 30s America, between Prohibition and the Great Depression, and discover Charlie, a rich heir who divides his time between social obligations and his hobby as a private detective.
During yet another official museum opening, Charlie witnesses a robbery, the victim of which is none other than his own girlfriend. Firmly set on investigating the case despite the reluctance of his uncle, the detective in charge of the inquiry, he unknowingly embarks on what will become the greatest adventure of his life!
Thanks to his unique skill and unrivalled memory, Charlie explores and investigates all the way into his dreams!
In true adventure game style, Dream Chamber will delight the genre’s fans and captivate new players!

THE HIGHLIGHTS:
• A unique graphic style!
• An original game with a brand new scenario
• Revisit your investigation scenes in your sleep – you might find the answers in your dreams!
• Solve many different enigmas and puzzles
• Interrogate the suspects and break their alibis via mini-games
• A jazzy and humorous atmosphere
• Voices in English and texts in French, German, Italian and Spanish

DON'T FORGET TO CHECK OUT OUR OTHER FANTASTIC ADVENTURE GAMES!

Nicolas Eymerich Inquisitor - Book 1: The Plague
Amerzone The Explorer's Legacy
Atlantis 2: Beyond Atlantis
Atlantis 3: The New World
Atlantis 4: Evolution
Atlantis 5: The Secrets of Atlantis - The Sacred Legacy
Aztec The Curse in the Heart of the City of Gold
Dracula 1: Resurrection
Dracula 2: The Last Sanctuary
Dracula 3: The Path of the Dragon
Dracula 4: The Shadow Of The Dragon
Egypt 2: The Heliopolis Prophecy
Egypt 3: The Prophecy
Jules Verne's Journey to the center of the moon
Jules Verne's Mystery of the Nautilus
Jules Verne's Return to Mysterious Island
Jules Verne's Return to Mysterious Island 2
Louvre The Messenger
Necronomicon: The Dawning of Darkness
Nostradamus The Last Prophecy
Road to India Between Hell and Nirvana
Versailles 2
Still Life 2 - Director's Cut

Nostradamus - The Four Horsemen Of The Apocalypse