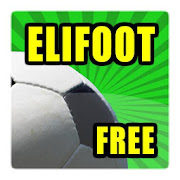 Elifoot is a famous, classic style Manager Game.
It has been classified as one of the most addictive games ever, due to its simplicity and entertainment capabilities.

Each player plays the role of manager and coach of a club, buys and sell players, manages the finances and selects the players for each match.

Among four divisions, each season comprises league and cup competitions.

* League update facility: when new leagues are delivered, a new Update Button is displayed on the home screen.

* Team files - TEAM NAMES AND PLAYER NAMES - can be edited on your SD Card. Folder name is Android/Data/com.elifoot.mobile/Files/Teams.