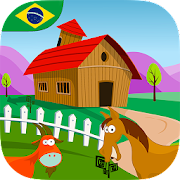 Learn, Test your skills and Play with beautiful cartoon images, words and sounds.
"Farm Adventure" is an all-in-one app for children of 2,3,4,5,6 or 7 years old that want to learn Portuguese as a native language or foreign language. The game helps children develop their vocabulary and their perception of objects and beings.

In the game, the kids will learn in an interactive mode:
a) The letters of the alphabet;
b ) Words :
- Numbers;
- Domestic animals;
- Colors;
- Shapes;
- Vegetables;
- Fruits;

The images are accompanied by the pronunciation in the Portuguese language and other specific sounds.

The voice sounds (female voice) are professionally recorded in studio.

The App has 10 levels:
1. Learn - interactive scrolling of characters. The kids can press on the characters and their names will appear above. Learn lots of words in the Portuguese Language

2. Play with colors – Learn the colors or test you skills. Press on the color blocks that create the pyramid and see if you have found the correct answer.

3. Sort Vegetables – you have 3 types of vegetables to pick and place on their specific basket. Each time you’ll press on the veggie, its name will be heard.

4. Labyrinth - Collect letters, create a word, find the animal and hear the pronunciation in Portuguese.

5. Jump – the birds a carrying fruits, vegetables, letters, numbers and you have to catch them in the air. Whenever you touch an item its name will appear on the screen and will also hear ii in proper pronunciation.

6. Match – Drag the shapes in their correct location and form new images. At the end, a funny animation will appear.

7. Drop - Run left or right and catch the fruits, vegetables, numbers and letters of the alphabet dropped by the birds. This is a learning and dexterity testing game.

8. Create a Fence - learn numbers and shapes. Create a fence around the sheep by pressing the numbers in ascending order and see what geometric shape is formed: triangle, square, trapezoid , pentagon , star .

9. Play various games - A) drop the colors to the animals and watch the animals change their color; B) Help the cat cross the road and avoid the dogs. If a dog catches you, you have to start over.