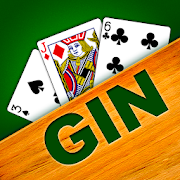 Since 1930s, the game of gin firmly appeared in popular American culture as gin rummy became a game of popular Broadway and Hollywood stars and was featured in multiple movies.

The goal in gin rummy game is to collect sets of 3 or more cards that ‘go together’. Such matching collections of cards are called melds.The melds either have to be of the same rank, like all sevens, or forming a sequence of the same suit – like 7,8,9 of hearts.

At the end, whatever cards are left in player’s hand that are NOT in those collections (melds), are called deadwood. Deadwood incurs penalties equivalent to the sum of their values. In the course of the game, players would try to discard unwanted cards and collect cards that would form melds.

In Gin Rummy GC online, at the start of each hand 10 cards each are dealt to 2 players. The 21-st card is opened face up and put next to the deck. This card is often referred to as upcard or up card. At each turn players draw a card by dragging it from either the closed deck or from upcard. When a player discards a card (by dragging it from own hand to discard), the discarded card is placed on top of the current upcard effectively becoming the new upcard.

Only at the very start of gin-rummy game either player (starting with the non-dealer) gets a choice either to exchange one of the cards from their hands with an upcard or to select a Pass button to pass this opportunity. Until 1st upcard is either passed or exchanged by both players, no drawing from the closed deck is allowed.

If both players pass (refuse) the very first upcard, the non-dealer must start a game by drawing the top card from the closed deck. He adds this card to his hand and discards ANY card on top of the original upcard to build the discard pile.

Thereafter, each player in turn must draw and add to his hand either the unknown top card from the closed deck OR the known upcard on the very top of the waste pile. In either case, the player completes his or her turn by discarding one card face up to the discard pile. It is not permitted to draw the upcard and discard it on the same turn.

The melds that a player is building may consist of
either 3 or 4 cards of the same rank
sequence of 3 or more cards in the same suit (Ace & King are not considered consecutive, but Ace and 2 are ).

A hand consisting entirely of melds with no deadwood is described as gin and carries a bonus. A player, however, does not have to wait for gin but may end a game as soon as the total value of his unmatched deadwood is 10 or less. (This is called maximum knocking value. It is set at 10 for regular gin rummy.

When a player is satisfied with the low value of deadwood in own hand, he or she can end the hand by ‘theoretically’ knocking on the table AFTER drawing an 11-th card and BEFORE discarding the last card [knock button]. The final discarded card is placed face up on the closed stock. It is very important to place the final discard onto the closed stock.