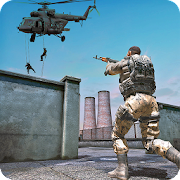 This new shooting game is the best fps game in the history of free games with new thrilling action-packed challenges.

This fps shooter combat mission game has all the unique features and intensive gameplay that any fps mission games lover is searching for. Real interactive first person shooter war games themed environment that will make gamers excited to play. Soon this will become one of the top games in the list of sniper games.


Features
- One of the games that don’t need wifi.
- Ultra REALISTIC 3D INDUSTRIAL graphics and cool animations
- Thrilling MISSIONS
- Tons of lethal GUNS and mortal WEAPONS
- ADDICTING gameplay (FPS)
- EASY controls and settings
- FREE game: play it both on your phone and tablet

From the starting point you play the role of a secret commando whose objective is to complete the impossible missions. Take down mafia syndicate before it’s too late. You are a commando soldier who has entered the combat to defeat terrorist on this battleground. It is your duty to aim and shoot at your target to survive. This is a fps shooting game where you can explore the massive map and hide to ambush your enemy and complete these seemingly impossible missions.

Here is your chance to show your fast paced firing skills using modern weapons, guns and other combat arsenal that you have learned in all those gun games. You are the main character of an elite army who has been trained to become the ultimate battle royal soldier. Eliminate all the terrorist in the limited time and lead the army on the frontlines of action-packed military combat.

Your rivals are not normal foe. Like all the new games there are army of enemy soldiers who are very dangerous. Form a team of commando to protect all the frontlines in the environment to succeed in your mission. Download this action game and taste victory by eliminating all the enemy generals. You are a best army shooter whose main objective is to fight in a battle and combat in the world war game’s environment.