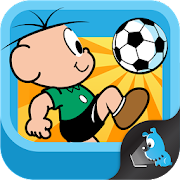 While playing kick-ups, Jimmy inspires Nutty Ned to create flying bricks that end up littering Limoeiro neighbourhood.
Your mission is to help Jimmy Five clean up his home. You can count on the help of other famous characters of Monica's Gang, such as Maggy, Jeremiah, Smudge and more!

To play, move Jimmy so he can continue to kick his ball up and break the bricks floating in the sky. But beware, you have to complete levels fast if you want to collect all the stars!

Show your skills and become the ultimate kick-ups champion by destroying all bricks in the sky and preventing Nutty Ned's plan of building a brick empire in the neighbourhood!

Jimmy Five's Brick-Breaker is not the typical Arkanoid and it will surprise and amaze you!

Bugfixes and updates to make the game wun smoothly.