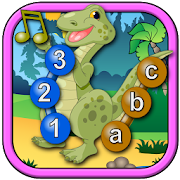 Complete connect the dot puzzles of your favorite dinosaurs, listen to their roar and learn how to pronounce each of their names.

Now with bonus match the pairs memory games and escape the maze logic games from the award winning educational game developer designed for toddlers and preschoolers aged 2 and above.

This educational and fun App helps young children learn the letters of the alphabet and the counting numbers while developing their hand eye coordination and puzzle solving skills. It is a great early learning game with photo quality pictures which toddlers, preschoolers, and kindergarten age children will enjoy.

Kid`s Dinosaur Join the Dots Puzzle has:
• high quality images set against photographic scenes that look great on High Definition (HD) and retina displays of both tablets and smart phones
• roars and fun sound effects for every dinosaur
• select from lowercase a b c... uppercase A B C... or numbers 1 2 3... for the dots in each of the puzzles
• optional hint feature to help young ones find the next dot
• shows written name and pronunciation for every prehistoric creature in the set (English language)
• teaches the order of letters of the alphabet from A to Z and numbers 1 to 26
• covers lots of your favorite dinosaurs including the Tyrannosaurus Rex (T Rex), Brachiosaurus, Stegosaurus, Triceratops, Dilophosaurus, Diplodocus, Gigantoraptor. Also covers some lesser known one’s like the Utahraptor, Zuniceratops and many others.
• puzzles that can be replayed again after solving and a star is awarded for each completion
• includes bonus match the pairs memory training game and escape the maze logic games
• increasing difficulty as your child progresses through the games in three distinct levels
• no advertising

Kid`s Dinosaur Jigsaw Puzzles comes with a selection of free puzzles that can be easily upgraded through a single low cost in-app purchase to enable all puzzles. By upgrading from the Free App to the full version you’ll also be entitled to all additional puzzles and features added in future releases.

Connect the Dots games have traditionally been a fun and early education learning tool for tots, toddlers, preschoolers, kindergarten, and early school age children and are a stimulating game for girls and an exciting game for boys.
• 2 year old and 3 year old children can practice their hand eye coordination and matching skills as they progress through the puzzles on each level and enjoy the roars and sounds on completion of each puzzle
• 4 year old and 5 year old kids can learn to read, write and pronounce the complicated dinosaur names.

We hope you and your children enjoy playing our latest and best early education game for toddlers and preschoolers.