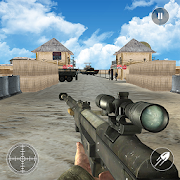 Get ready for a fun and addictive FPS sniper challenge action game to take on the biggest retaliation of all time. This one of the best Sniper elite FPS Shooting Games includes all types of Special Forces survival warfare of gunnery legends and Army sniper shooter scenarios and wipe out Ops missions. In this epic tactical battle simulator use amazing arsenal such as shotguns, rocket launchers, hand grenades, ballistic missiles, hand held shotguns and rifles. Our hero is a stealth special ops operative and a US army commando swat team specialist fierce battle shooter. In this action packed, adventure filled game you will encounter military trained assassins who are war specialist and deadly assassins. As a brave army commando aim and shoot your way through elite dangerous commandos in this fun thriller action packed fps game. show your battle prowess by becoming the ultimate battle strategist.

In this one of best combat of sniper shooter war games, Agent Jason Dash is a top US IGI Commando Marine Corps and a special ops trained sniper, also known as the Chris Kyle of the new era of war of legends. The Strike IGI Combat Agency got some lead about a deal of heavy nuclear missile weapons between two terrorist organizations on an industrial site from their militants’ command and control center. The terrorist red alert threat is on its way. Gunnery Sergeant of Green Beret, Agent Jason Dash is assigned the wipe out retaliation and terrorist hunting mission to destroy the deal and conquer over all the terrorists and the head of terrorist organization. Halting the heavy nuclear missile deal before completion will not be an easy mission in this arena, as the warrior terrorist organization is very vigilant and will break an ambush onto Marine Corps IGI agency, if its identity is compromised. There might be an uphill slam battle from there.

In this one of the best epic games of shooting, ready your assault gear of sniper shooter to battle in the most intense shooting survival showdowns, combating terrorist organizations in a fast paced FPS exchange, where your Agent Jason Dash, the IGI Commando Marine Corps Sniper is equipped with a mega damaging sniper rifle and a dexterous shotgun and handgun for swift attacks, you also have to take out all the RPG launchers. You have to recover the nuclear missile arsenal from going into the wrong hands. Your shooting skills and troopers survival instincts will be tested in this wipe out retaliation FPS Shooter Game.This game is one of the best sniper rifle and military troopers Ops strategy game which has lots of ultimate action of sniper shooting and assassin thrill missions against deadliest militants. From sniper war city to urban army sniper and fury of the sniper in the desert ambush, it has many different new scenarios and slam war missions.

One of the Best Army Shooting Games

In this new sniper game of legends, play in 5 epic challenging levels, where your sniper spy will tasked to crush the terrorist organization’s attempt to accomplish weapons deal. The progressing danger levels will phase the commando sniper of Special Forces with more daunting tasks, taking on army tanks with RPG bazookas to engaging in a finale ambush battle with the terrorist organization leader of the biggest and most dangerous militants group, as he attempts to take you down with his massive machine gun in this mastermind military strategy game.