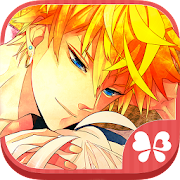 “Mononoke Kiss+” is a novel type dating simulation game, depicting a forbidden romance between a princess (a player) and a mononoke (a handsome humanoid monster).
The story starts with a scene in which mononokes attack a castle. All of a sudden a mysterious beautiful man appears in front of the princess and saves her from a danger; they leave the castle to escape from the mononokes. At first the princess feels uneasy about the man, but as they spend time together, she has started to fall for him.

===Main features===
- Play basic story for FREE: It’s a story of a fantasy-like historical romance with three amazing men.
- Choose your favorite character: There are three men (characters) available in this game. You can choose among the three men to begin your romance.
- Multiple-endings: The choices you make will determine how each story ends.
- Beautiful still graphics: Check out the beautiful artwork by the Japanese illustrator.
- Decorate your own avatar: More than 100 cute items available to choose from including seasonal outfit . The avatar feature is a great opportunity to show off your creativity!
- The basic story plot is the same as the paid version " Mononoke Kiss".

=== Story ===
Once upon a time… Mononokes (humanoid monsters) were living discreetly in human society. And my life as a princess was full of peace… One day, some mononokes attacked my castle! One of them said to me, “You must be Yuri’s daughter.” And he attempted to take me away. “What the earth is going on!? Somebody, help me!!” Then all of a sudden, four young men appeared in front of me. “Who are you? What’re you doing here?” Now, I have to choose one of them to escape from the mononokes. Two of them, Enojo and Hajime are reaching out their hands to me. Which one should I choose? Or should I run away by myself―which brings me to meet Raizo.

Thank you for playing "Shall we date?: Mononoke Kiss+"!