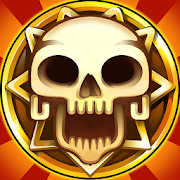 You are running for your life and chased by hordes of undead skeleton pirates, which you just summoned from the afterlife. Pirates Don’t Run is an action packed story driven endless runner you've never seen before.

You must run through diverse and evolving environments and avoid dangerous obstacles. Collect coins and make your escape easier by upgrades and power ups.

Read an exclusive digital comic book telling a thrilling story of our hero characters adventures in the world filled with pirate myths and legends. Play the game and unlock the whole epic story!