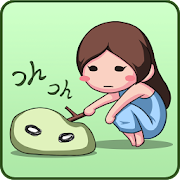 One day in a small town, it appeared. At first, people didn't even notice, except some kids. They named it Popipu and played with it.

At first, Popipu will only move around and react to stimulations by instinct. But with enough interaction with people, it will evolve!

Just like anyone's life, the path of evolution is an uncertainty! The way how Popipu evolves depends on several conditions!

What will be the fate of Popipu?

- Simply tap on the people to let Popipu *play* with them and gain exp!
- Evolve into many different forms that are definitely out of your imagination!
- Path of evolution depends on how Popipu *plays* with people. Discover up to 6 possible endings!
- *Play* with rare victims! Win the minigame challenge for exp multiplier!
- Use special items to help Popipu on its path of evolution!
- Meet the God of Friendship! Invite your friends to *play* with Popipu and discover new evolution possibilities!
- Are you scared of a little blood and gore?