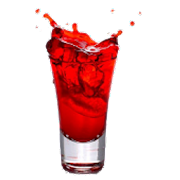 Reversi Shots is a familiar Reversi game (aka Othello) with alcohol concept.
Game on Android smartphones and tablets!!!

Reversi Shots is a game for two players.
The game fit people who love to drink alcohol.

Goal:
Outflank your opponent to flip your opponents discs to your color. The player with the most discs of his color at the end of the game wins. the loser need to drinks shots that the game toss him as the result.

Rules:
The player who move first Will be the orange soldier.
Players alternate moves by placing a disc of their color such that the disc outflanks their opponent.
Outflanked opponent discs are flipped to player's color.
If a player cannot outflank her opponent, ie, he has no legal moves, the player must pass the turn to her opponent.
once the board becomes full, or if neither player can make a move, the game is over.