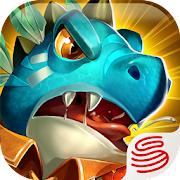 "Rise of Dinos you must build and defend your village against enemy Dino tribes! Collect epic Heroes and bestow them with powerful skills to explore new lands, go on exciting adventures and fight thrilling battles against players from all over the world! Take complete control of your Heroes in battle like you've never seen before by directing them in realtime! Experience a whole new world of strategy and tactics to attack your enemies and build your defense!
FEATURES:
-Create, build and upgrade an undefeatable tribe of Dinos-Gather and upgrade Heroes to lead your Dino troops in battle
-Give your Heroes epic powers and skills to rule the battlefield-Team them up and control your Heroes’ actions directly in battle!
-Battle against players from all over the world!-Plan out and defend your village against invaders with towers, bombs, traps and catapults.
-Create and join powerful Clans to get help from other players-Free to play & Dino-tastic!!"