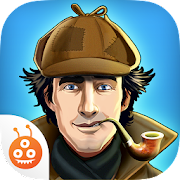 More than a century ago, Sherlock Holmes, the greatest detective of all time, disappeared without a trace. Nothing was heard of him again... until now.

In your role as a rookie agent of Scotland Yard, follow an intricate murder case that will take you to a key witness in a hospital: a professor of English literature who claims to be none other than the famous Sherlock Holmes.

This mysterious character will prove himself helpful, with an uncanny ability to sniff out clues! With his help, you’ll dive into the underworld of modern London and confront a mysterious masked man.

Please rate Sherlock Holmes after each update! Your feedback is really appreciated.

Journals of the Unknown