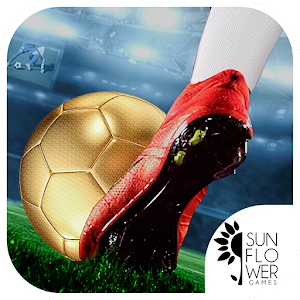 It’s here the best football game for Android. Become a soccer legend with SOCCER LEAGUE 2016: KICKS & FLICKS. Put yourself in top striker’s shoes and score as many goals as you can in the best soccer stadiums with this realistic football game. You will completely feel the emotion of free kicks like a big soccer hero. Train, improve, flick the ball and play against clock in many different stages where test your football skills.

Begin to score goals as soon as possible and develop your professional career impressing manager worldwide. Overcome levels and win coins to be the hero of your dream team. Train your soccer skills and become the best football player. All the football manager of the soccer league will be impressed with your powerfull shot. You will be in the Top10 of the best football legend and you will be a new star soccer.

Download now FREE SOCCER LEAGUE 2016: KICKS & FLICKS and start to feel the vibes with the different games modes and feel with your friends the excitement of being the best like a hero with this soccer game
Enjoy this perfect sport game developing your professional career in football stadiums worldwide. Cities like Madrid, Barcelona, Milan or Manchester are waiting for you! Will you play in best soccer stadium?
Stand out as a striker, dribble to the defender and score as many goals as you can around the world. Be the hero of the soccer league and triumph in countries like Spain, Brazil, England, Portugal or Germany. This 2016 you will be able to achieve glory, fame and money being a new star soccer.


Sport press attending the stadium will surrender to your feet. Make all actions of the best football players only by sliding a finger. It has never been so easy to shot free kicks like a famous soccer player.
Challenge your friends to be the best in the world ranking and be the most popular football player among FIFA agents and football manager.

This free game has many modes in which put goalkeeper to the test. Begin your professional career in humble places and end up playing in best football stadiums. Madden the goalkeeper with your free shot. Share your score online and simulate a world tournament like the world cup,eurocopa, america's cup or olimpic games where the goal is to reach the final, fame and glory.
Get coins and to acquire experience in world soccer by buying packs with exclusive balls, boosters with incredible effects, top stadiums…


Enjoy the best football game for Android in your mobile or tablet and start to simulate tournaments like eurocopa, america's cup, world cup or olimpic games

★ Free sport game and easy to play.
★ Enjoy stunning 3D graphics and live most realistic football.
★ Feel the vibes with two exciting games modes.
★ Spectacular kick control and amazing animations.
★ Compite with real users across the world ranking.
★ Obtain coins and experience with your best free kicks.
★ Record your best goals and share them with your friends.
★ Feel at first person the emotion of penalties and free kicks.
★ Improve your equipment and get new balls, amazing booster and spectacular stadiums.
★ Simulate authentic pressure of the football stadiums with his hyper-realistic sound.
★ Be your own manager with this soccer game.
★ Our team works to offer to you the best gameplay experience.

Watch the trailer and begin your profesional career like a football legend!:
https://www.youtube.com/watch?v=DDVAheytLVw&nohtml5=False

- Fixes in some textures.