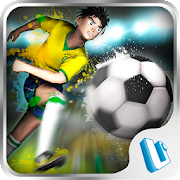 New instalment of Striker Soccer Saga! This time you have to lead your soccer national team to glory in the 2014 World Championship Brazil.

You can play four different game modes with 32 national teams competing in the 2014 Brazil World Championship. Apart from the 32 national teams, you can play with other 28 teams invited to participate in Road to Brazil. Including the best features of the previous instalments which had over 12 million downloads, Striker Soccer Brazil offers new modes and awesome features on the occasion of 2014 World Championship Brazil.

CHOOSE FROM 60 NATIONAL TEAMS FROM ALL OVER THE WORLD

Play FRIENDLIES or turn your team into champions in the WORLD CUP mode (it includes qualifying round). Enjoy the new ONLINE COMPETITION MODE in which you will play to add points to your national team country ranking and so win REWARDS every week. Another new feature is the ROAD TO GLORY MODE where you have to complete 35 missions on the road to claim the 2014 World Cup title.

✔ Set a match-winning tactic for each match. You have up to 7 different formations available.
✔ Three levels of difficulty
✔ Full control of your players on the pitch: shoots, passes and tackles in a simple and easy way.
✔ Format and schedules similar to World Championship: the group stage, the quarter-finals, the semi-finals and the final.
✔ Earn keys and coins to purchase new skills.
✔ Intuitive controls for experienced players and newcomers alike.
✔ 3D visuals and vibrant animations bring the game to life