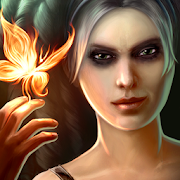 FANTASTIC HIDDEN OBJECT PUZZLE ADVENTURE GAME FROM THE CREATORS OF ENIGMATIS AND GRIM LEGENDS!
It is the year 1830, and a beautiful young governess named Esther has just received a letter that will lead her to embark on the adventure of a lifetime and learn all the mysteries of her family’s story.

An immersive story with mini games and HOs!
The message has been sent by Esther’s aunt to tell her that her parents, whom she never met, have left her an inheritance – a mansion in London. But when she goes there, it turns out that the beautiful residence is abandoned, run-down, and home to many mysteries.

52 beautiful, hand painted locations!
When she explores the mansion, going through puzzles, mini games, and slowly learning her family’s mysteries, she discovers that for many centuries members of her family have been investigating the captivating phenomenon of time travel.

Immersive time manipulation puzzles and mini games!
Esther’s exciting adventure, which will lead her to captivating, hand drawn places – and moments in history – begins when she finds the strange legacy of the Ambrose family. During her adventure across time and space, beautifully depicted in hand drawn locations, she will solve extraordinary puzzles and mini games and experience supernatural events, all while trying to unravel the mysteries of her heritage and learn the story of a struggle between the wizard Merlin and his rival, Viviana.

Save Esther in the Collector’s Edition!
The additional content includes a bonus chapter and plenty of hidden objects in extra HO scenes, as well as an immersive, beautifully composed soundtrack and hand drawn concept art.

Play with your family!
A simple but beautiful game that’s easy to enjoy with your kids!

Take the adventure on the bus!
Optimized for phones and tablets, filled with hidden objects, perfect for playing while traveling. No internet connection required, so you can play offline!

Sign up to our newsletter and get adventure games on sale!
Captivating adventures, beautiful stories, and scary mysteries await in our selection of immersive hidden object puzzle games!

• A portable time machine – change the history according to your will!
• 21 diverse mini-games and 16 hidden-object scenes
• 52 beautiful, hand-painted locations
• Time manipulation puzzles
• 7 intriguing heroes, each with their own secrets
• Possibility to re-play 9 mini-games and 16 hidden-object scenes
• Additional second adventure
• Game world encyclopedia
• High-end, immersive gameplay, optimized for tablets and phones!